Flood causes considerable damage to human lives and property almost every year. About 48% of total flood prone area (40 mHa assessed by the Rashtriya Barh Ayog) of the country has been provided with reasonable protection against flood of a low to moderate magnitude due to technological and economic constraints. It is not possible to provide protection against all magnitude of flood. Flood Forecasting & warning has been recognized as the most important, reliable and cost effective non-structural measures for flood mitigation.
At present, CWC is entrusted with monitoring of flood situation in the country during designated flood period by observing water levels/ discharges along the major rivers in the country and issuing flood forecasts to the local administration/ project authorities/ State Governments and other Central Ministries such as Home Ministry, NDMA/ NDRF etc.  Flood Forecasting Network covers 325 stations covering 197 low lying area/ cities and towns besides 128 reservoirs all over the country. The network is spread on twenty river systems viz. the Ganga & its tributaries, the Indus/ Jhelum, the Brahmaputra & its tributaries, the Barak, the Eastern Rivers, the Mahanadi, the Godavari, the Krishna Cauvery, East Flowing Rivers , Narmada, Tapi and the West flowing rivers, over 25 states viz. Andhra Pradesh, Arunachal Pradesh, Assam, Bihar, Chhattisgarh, Gujarat, Haryana, Himachal Pradesh, Jammu & Kashmir, Jharkhand, Karnataka, Kerala, Madhya Pradesh, Maharashtra, Odisha, Rajasthan, Sikkim, Tamilnadu,  Telangana, Tripura, Uttarakhand, Uttar Pradesh & West Bengal, one Union Territory of Daman & Diu and National Capital Territory of Delhi. The flood forecasting and advance warning for 197 low lying areas/ towns and 128 reservoirs help the user agencies in deciding mitigating measures like evacuation of people and shifting their movable property to safer locations. The Inflow Forecasts at 128 reservoirs are used by the dam authorities in timely operation of reservoir gates for safe flood discharges downstream as well as to ensure adequate storage in the reservoirs for meeting irrigation and hydropower generation demands during non-monsoon period. Such services are normally available during flood period from 1st May/1st June to 31st October/31st December every year. The forecast are disseminated using all types of communication means such as fax, wireless, phone, mob, SMS, email, electronic media, print media, social media, website, etc. Annually, over 7000 flood forecasts and advance warnings are issued by CWC regional offices across the country to the user agencies during floods. The overall accuracy of forecasts issued by CWC over the past years is above 90%.
The Central Water Commission has categorized various flood situations, for monitoring the floods in the country though its flood forecasting network, into four different categories namely Normal, Above Normal, Severe and Extreme depending upon the river water level with reference to warning level, danger level, and highest flood level.

The river is said to be in “NORMAL FLOOD” situation at any flood forecasting sites when the water level of the river is below the warning level.

If the water level of the river at flood forecasting site touches or crosses its Warning level, but remains below the Danger Level of the site then the flood situation is called the “ABOVE NORMAL” situation. Yellow colour has been assigned to this category.

If the water level of the river at the forecasting site touches or crosses Danger Level but below the Highest Flood Level of the forecasting then the flood situation is called “SEVERE FLOOD” situation. Orange colour has been assigned to this category. In “Severe Flood Situations” a special “Orange Bulletin” is being issued by the Central Water Commission to the users agencies which contains the “special flood message” related to the severe flood and is updated every three hours.

The flood situation is said to be “EXTREME” when the water level of the river touches or crosses the “HIGHEST FLOOD LEVEL” recorded at any forecasting site so far. Red colour has been assigned to this category. In “Extreme Flood Situations” a special “Red Bulletin” is being issued by the Central Water Commission to the users agencies which contains the “special flood message” related to the extreme  flood and is updated every hour. 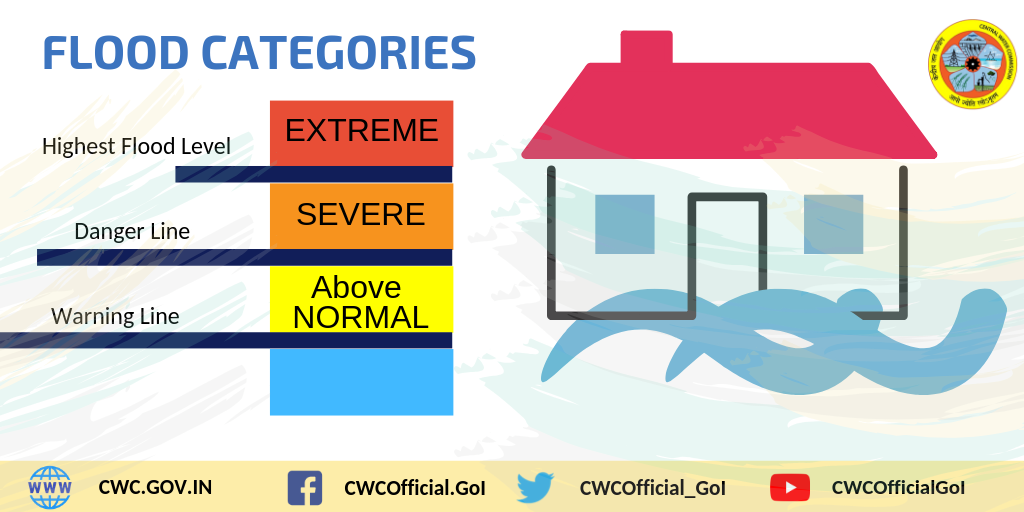