Description about Indus Basin and its Sub Basins 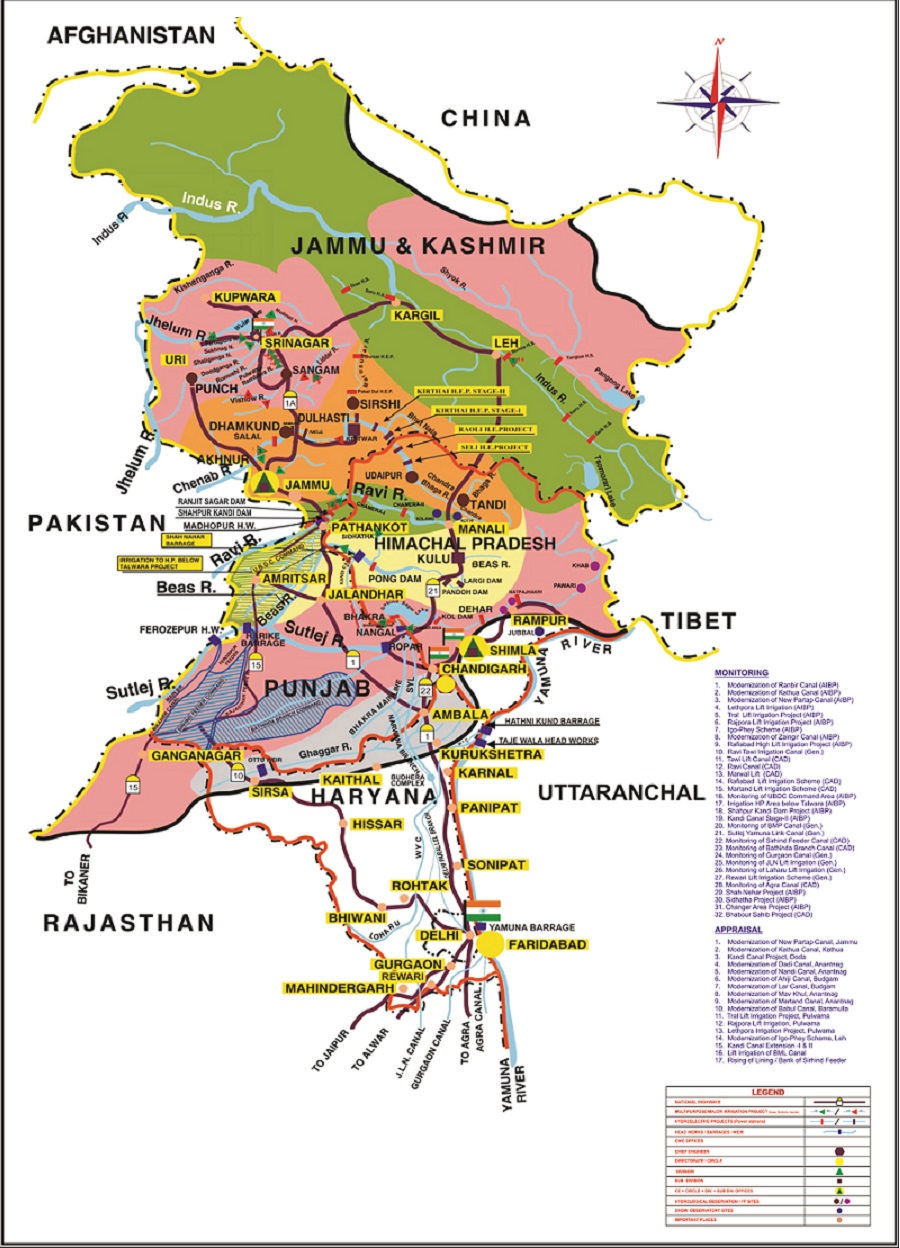 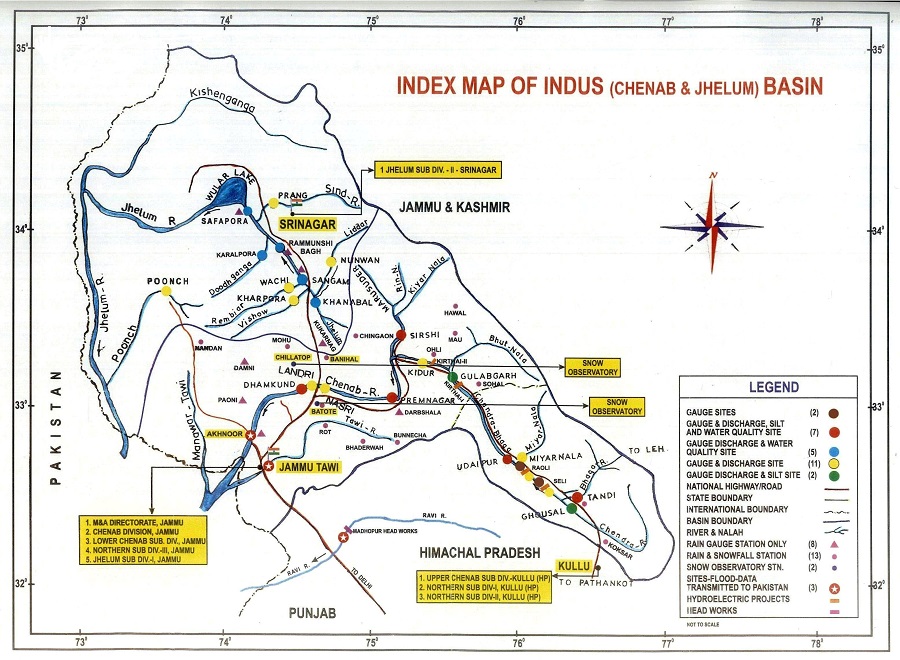 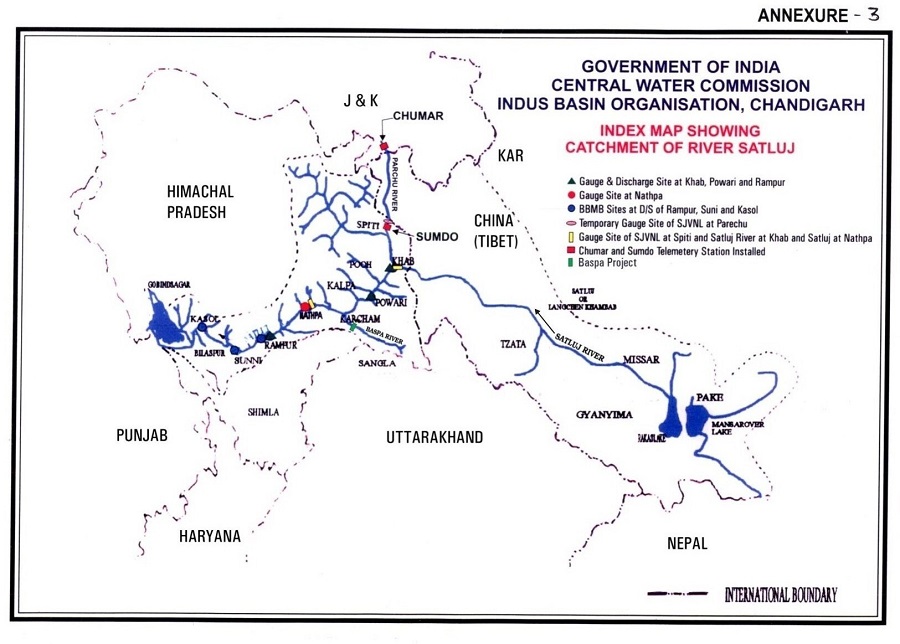 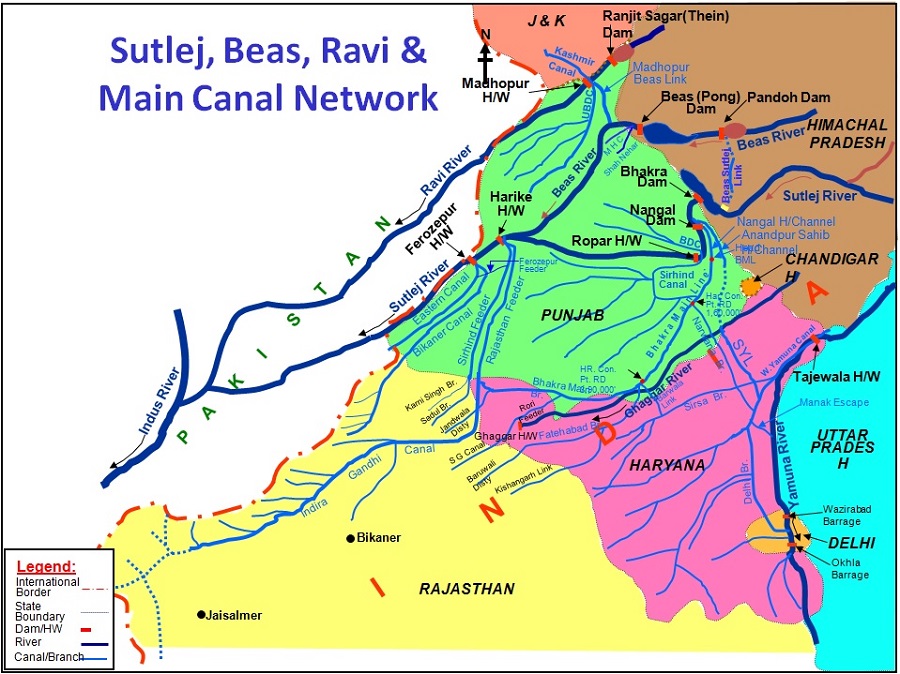 The State-wise distribution of the drainage area is given below:

The Indus is the western most River system in the subcontinent. Jhelum, Chenab, Ravi, Beas and Satluj are its main tributaries. The Indus originates from the Bokhar Chu (glacier) in northern slopes of Mt. Kailash (6714m). It drains the largest number of glaciers and mountain slopes of the Karakorum, Ladakh, Zaskarand Himalayan Ranges. Originating from the Kailash Mountain, it flows in a constricted valley north-westward through Tibet, where it is called as Singi Khamban or Lion’s mouth. In ladakh it follows a long nearly straight course between the Ladakh range and the Zaskar range. In the first 480 km, it flows along the northern flank of the Zaskar range over a flat country at heights over 3200 m where it receives River Zaskar below Leh. Suruand Dras are the other left bank tributaries which join the Indus near Kargil. Moving north-westward, the Indus is joined by the Shyok-Nubra tributaries. These tributaries arise from the Siachin Glacier (Karakoram Range). At Skardu, at a little distance below the Shyok, the Shigar River meets River Indus. Gilgit is another important tributary which comes from the west to join Indus. Downward; the Indus crosses the central Himalayan range through a huge synclinal gorge. The River passes by the Nanga-Parvat and turns south-west to enter Pakistan.

The River Jhelum formed by the water of a spring viz. Cheshma Verinag situated at the foot hills accommodating Banihal pass in the south eastern corner of the Kashmir Valley and flows towards west through the Kashmir Valley. In the course up to Anantnag town three major tributaries viz. Sandran River, Bringi River and Arapath joins on its right flank. Lidder a biggest River of all the effluents that forms the head waters of River Jhelum and is fed by a number of glaciers from the high ranges, joins on its right flank at 2 km. downstream of Khannabal town. River Vishow and Rambiara drains their water on its left flank at 4.82 Km upstream from Sangam town and between Sangam and Srinagar, Jhelum River receives two small streams viz. Watlara and Arapal on the right flank, and three small streams viz. Rambiara, Sasara, Romuhi on the left flank. Romushi River ordinarily swells up considerably when it is joined by spill from Rambiara River. From Khanabal to Srinagar River Jhelum flows along the right side of the valley abutting close to the hills, in a zigzag manner. Just before the River enters the main city of Srinagar which is situated on its both banks it is joined near Shergari by a stream which drains from Dal Lake. At Banyari 20 km. downstream the River joins with the water of Wullar Lakes and takes off from the lake at its south west corner and flows to the south west direction through the alluvial plain for a length of 21 km up to the bridge at Baramulla. At Baramulla the River enters a gorge in the hills. After flowing through this gorge for about 5 km, the out fall channel takes off a sharp bend towards the left. The end of the gorge at Khadanyar is marked by huge rock projecting into the River from the left side. Below Khadanyar River takes a sharp turn rushing over rapids. From Wullar Lake to Khadanyar in a stretch of 26 km number of streams viz. Wingle, Pohru, Vij meet the River.

The river Chenab (or Chandra Bhaga) is formed after the two streams; the Chandra and the Bhaga merge with each other at Tandi. The Chandra and the Bhaga originate from the South-West and North West faces of Barelacha pass respectively in the Himalayan canton of Lahuland Spiti valley in Himachal Pradesh. The Chandra initially flowing Southeast for about 88 kms sweeps round the base of the mid Himalayas and joins the Bhaga at Tandi, after traversing a total length of about 125 km. The course of Bhaga up to the confluence is 80 km only having a steep slope with an average fall of about 24 meters per kilometer. There-after the united stream, known as Chandra Bhaga (Chenab), flows in a North-Westerly course for about 48 km where it receives its first major tributary the Miyar Nallah on the right bank. Then it flows another 96 km generally in a Northerly direction in Himachal Pradesh till it crosses the Pangi valley before entering to Paddar area of Kishtwar district of Jammu and Kashmir State. In Padder valley it is joined by Bhut nallah at Gulabgarh. The river flows in a North West direction in this reach for a distance of 61 km where it is joined on the right bank by its biggest tributary, the Marusudar at Bhandarkot. Further downstream, the river flows in a Southerly direction for a distance of about 32 km up to Thathri and then takes a Westerly course. In this reach, about 15 km downstream of Thathari, Niru Nallah joins the Chenab River on its left Bank. Thereafter the river flows generally in a North West direction for another 41 km till it receives a tributary Bischeleri on the right bank. After wards the river traverses in west direction for a distance of about 64 km. In this reach a number of small streams namely Cheneni, Talsuen, Yabu, Ans join on the right bank , and Katu Nallah, Mandial and Painthal Khad joins on the left bank .At the downstream of Ans river confluence, the river changes its direction and takes a Southerly course for about 55 km up to Akhnoor. Thereafter it enters into Sialkot district of Pakistan. The total length of the river from confluence of Chandra and Bhaga to Akhnoor is about 410 km.

The Ravi River originates in the Himalayas in the Chamba district of Himachal Pradesh. The River drains a total catchment area of 14,442 sq.km in India after flowing for a length of 725 km. Flowing westward, it is hemmed by the PirPanjal and Dhauladhar ranges, forming a triangular zone.

It follows a north-westerly course and is a perennial River. It is the smallest of the five Punjab Rivers that rises from glacier fields at an elevation of 14,000 ft. (4,300 m), on the southern side of the Mid Himalayas. It flows through Barabhangal, Bara Bansu and Chamba districts. It flows in rapids in its initial reaches with boulders seen scattered in the bed of the River. The Ravi River in this reach flows in a gorge with a River bed slope of 1:185 ft. per mile, and is mostly fed by snow melt, as this region falls under rain shadow zone. Two of its major tributaries, the Budhil and Nai or Dhona join 40 miles (64 km) downstream from its source. It is the most important River of the district Kathua. The length of the River in the district is approximately 55 km.

The Satluj River, which is one of the major five rivers of the erstwhile Punjab, is a main source of water for Himachal Pradesh, Punjab, Haryana, Delhi & Rajasthan. This river is a tributary of the river Indus & originates near Mansarover Lake in Tibet at an altitude 4572 m. Satluj is joined by the river Spiti at flows through 320 kms from border through Shipkilla, Pooh, Powari, Tapri, Karcham, Nathpa, Rampur, Sunni and Dehar to meet Gobindsagar reservoir (Bhakra) near Bilaspur in Himachal Pradesh.

The water resources of the basin is well developed. During the pre-plan period many diversion works such as Upper Bari Doab canal, Sirhind canal, Ranbir canal, Eastern canals and Gang canal existed in the basin. Important projects taken up and completed in the plan period include Bhakra-Nangal, Beas project, and Harike barrage. Rajasthan canal, Thein dam, Sutlej-Yamuna link canal and Ravi-Tawi lift irrigation are some of the important projects under construction in the basin. The present surface water utilization in the basin has been assessed at an average of 40-42 cubic km. which is 87% of the utilizable surface water potential. Nearly 71% of the utilizable ground water in the basin has also been exploited so far. The water resource development in the Indus basin is governed by various provision of the Indus Water Treaty, 1960. According to this Treaty, the water of the Eastern Rivers, namely, the Ravi, the Beas and the Sutlej, shall be available for the unrestricted sue by India. India has also been permitted to make from the Western River, domestic non-consumptive uses, uses for run-of-the river hydroelectric plants and specified agricultural use and construction of storage works.